7 Things I Learned in November 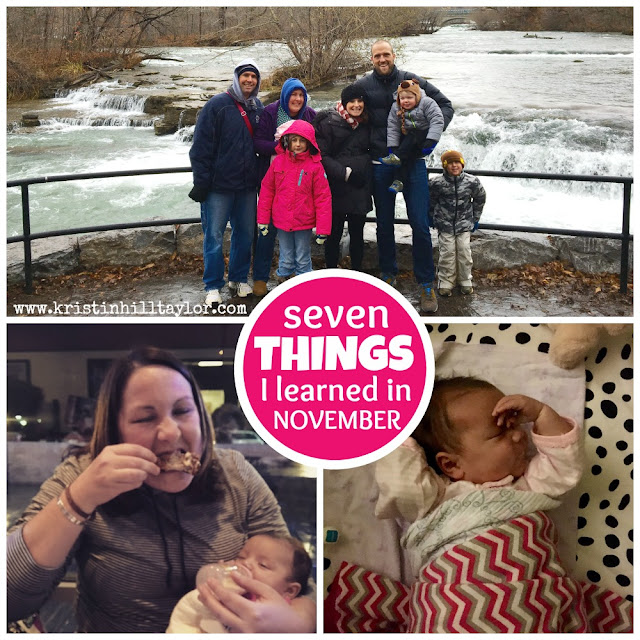 I'm going to spare you my rant about how November got away from my completely. Team Taylor did lots of fun things, some of which I allude to here and others I'm still hoping to blog about. I'm getting over a cold and gradually getting into the Christmas spirit.

But first, let me share seven things, in no particular order, that I learned this month ...

Well, here I am with my third child, and I thought she had a fever. Maybe she did. But maybe it wasn’t really 100.5 because forehead thermometers aren’t accurate when said baby is only 6 weeks old. She had been congested, so I took her in to get checked out. She was fine and I felt a little like a brand-new mom.

I’d never heard of this show, which has apparently been on ABC Family, but binge-watched the first season a couple months ago. I was so excited when Netflix emailed me to tell me the second season was available. (Netflix knows me, y’all.) I watched those 13 episodes like I had nothing else to do and then Google told me the show had been canceled. Yes, I was Googling to find out when season three was coming on so I could set my DVR accordingly. Bummer.

3. Cate spent the first 2-plus months of school sitting on a dictionary.

I know you’re thinking, “What? Why?” because that’s what I thought when we were in the McDonald’s drive-thru and she made a comment about getting used to sitting on hard surfaces. Um, why child? Turns out her desk is too tall, but when it’s lowered to the next level, it’s too short. After telling me about how the dictionary solves the height issue, she told me she sometimes tries to sneak a seat in her friend’s chair because he sits on a desk chair cushion.

I ordered her the same desk chair cushion – although in a different color – from Amazon right there in the McDonald’s drive-thru. In other mom confessions, that was the second time I had been in the McDonald’s drive-thru THAT DAY. The first time was that morning for a large Diet Dr Pepper for myself. The second time was that evening for a large Coke for my best friend.

People thought we were crazy for going, but we wanted to visit my sister and her family, so we went anyway. Two of the days we spent there were in the 50s. Okay, so the other one was in the mid-30s, but there was no snow.

Of course, there were no babies either. My sister is almost 37 weeks pregnant with twins, and I was not-so-secretly hoping she’d go into labor while we were there. She didn’t. But I was glad to hang out with her , her husband, and her almost-2-year-old son.

(More on our trip coming later this week.)

5. Liane Moriarty is my kind of author.

I read “The Hypnotist’s Love Story” this summer while sitting by the pool. This month I read “The Husband’s Secret” and “What Alice Forgot” then started “Big Little Lies” on our way home Sunday. I like the way the stories are told using various characters who are somehow intertwined. There’s a mystery element of what’s going to happen next or be revealed from the past that keeps me turning the pages.

6. Six or seven hours is a decent night’s sleep.

Y’all know the hardest thing about a newborn for me is the interrupted sleep. I prefer 8 or 9 hours every night. Honestly, Rachel has been a trooper from the beginning – waking up once or twice in the middle of the night to eat and then going back to sleep. Well, when we were in Buffalo, she slept 6.5 hours one night and then 7 hours the next night. THAT’S LIKE ALL NIGHT IN NEWBORN SPEAK. Last night, she managed six straight hours during her first night back in her own bed. I’ll take it … and be hoping for even longer stretches!

7. I can eat buffalo wings with one hand while feeding a baby.

It's true. I had my doubts, but I managed. And then my brother-in-law Zac informed me I was just perfecting my wing-eating technique because he prefers using one hand so the other stays clean. Yes, we ate wings while in Buffalo. Seemed appropriate.

How was your November?

I'm linking up with Emily Freeman, like I do at the end of every month.

Want more insights? "Peace in the Process: How Adoption Built My Faith & My Family" is available on Amazon. Like me on Facebook, follow me on Twitter, peek into my life on Instagram, follow 152 Insights at Bloglovin', or subscribe to receive "Insights in Your Inbox."
Posted by Unknown at 11:32 AM
Filed in books, food, motherhood, Rachel, road trips, Things I Learned, TV