Football is a fall sport ...

It's football season! Yeah, I know, it doesn't feel like it. Trust me, I know. We watched Murray State play at Louisville yesterday and it was 100 degrees. And that's no exaggeration. We even tailgated in the hot, summery weather that made wish a beach was close.

Our quick road trip to Louisville, tailgating before watching our Racers and hanging out with some family and friends were fun ways to kick off football season, even if the weather doesn't seem as eager to give way to fall. 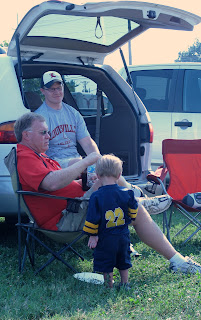 Ben befriended these Louisville fans who were tailgating next to us. He babbled about the planes that he saw in the sky, the other cars and who knows what else. 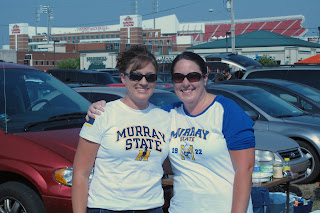 This was before Courtney and I were sweaty mess. Go Racers! 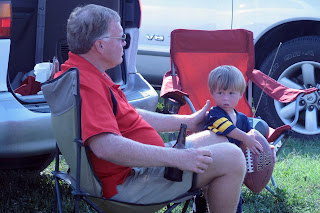 Ben really liked Steve. So much so, he barely paid any attention to us. And "us" included both grandmas. 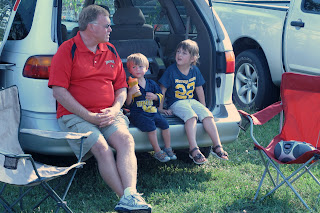 The Racers offense struggled to come alive, but the defense played well. Louisville won 21-9, but we were glad to be there, wearing our blue and gold, in that sea of red. Perhaps Mother Nature will decide she's ready for football soon.

________
Want more? Subscribe to get "Insights" in your inbox. Or follow me on Twitter.
Posted by Unknown at 3:59 PM
Filed in Ben, Cate, Racers, road trips, sports, weather