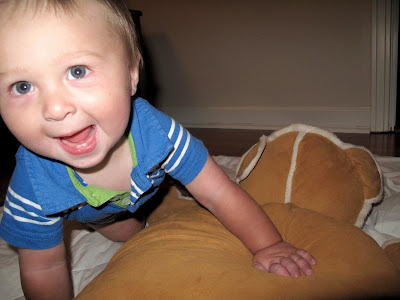 Pardon the delay. Ben was officially 8 months old on Friday, but I was on the road enjoying some much-needed time with my dear friend before playing more with my family. Hey, I'm only six days late.

Just as Ben was turning 8 months old last week, he decided he was going to ...

* crawl.
* clap.
* say "momma" while crawling after me, like he knew what he was saying.

* is working another tooth. Maybe teeth.
* can go from sitting to crawling to rolling with little effort.
* laughs often, especially at his sister, who still calls him her "new brother."
* can put Cheerios in his own mouth.

That picture up there is totally is personality, which is why I posted it despite the brightness of his forehead and cheeks. He's a happy boy who loves that he can move on his own. He smiles often, unless, of course, he's hungry, and then he's mad. And he loves to hear himself babble, make clicking sounds with his tongue and scream. Just for the record, he has both a playful, mostly pleasantly scream and a mad scream.
Posted by Unknown at 3:21 PM
Filed in Ben