I had been itchin' to go to Holiday World. So we incorporated Holiday World into our Louisville road trip this past weekend. The four of us plus my mom and niece went with us. [Reason #46 I am thankful for our mini van: We can just take one vehicle on a day trip like this.]

In case you don't live anywhere near me or the South in general, you should know ... It's been hot. Like really hot. Like sweat constantly running down the spine of your back into your shorts hot. Like sweat running from your forehead into your eye hot. Yeah, hot. And, really, I should say humid. So, anyway ...

It was hot. But we had a great day. 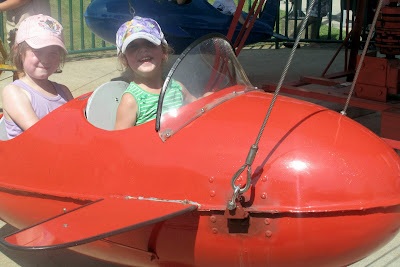 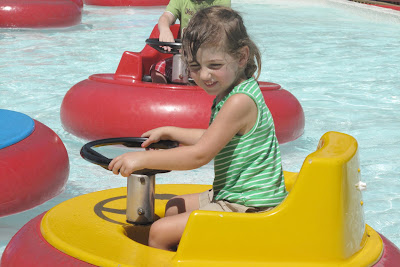 The girls -- meaning my 3-year-old Cate and my 6-year-old niece Milla -- rode some kiddie rides. Everyone but Ben and me rode the carousel. [More on that to come ...] Greg took the girls on the train through fairy tale land and then played with them in the sprinkler area. Then all us girls -- meaning my mom, Cate, Milla and I -- rode the Tilt-a-Whirl-type ride.

Our only real mistake came when we decided to eat lunch at the water park. We had hoped for indoor dining for a break from the heat and we thought we found one in the Thanksgiving section of the park. Mom and I saw turkey and ham on the map description, and we thought about sandwiches. Turns out, Holiday World serves Thanksgiving dinner every day ... outside under umbrellas. Um, no. A tad heavy on a day that was as hot as ... well, as hot as I described earlier.

Because we were so close to the water park, we went on in ... and joined everyone else who was eating a late lunch in their bathing suits. We ended up with a table, thankfully. Greg got in line for food. I got in line for drinks [FREE DRINKS!!!]. And Grandmom kept her granddaughters from completely breaking down and tried to distract Ben, who wanted a bottle.

All ended well. We ate. And then we found rest in a wave pool [I say "a" because Holiday World ... well, rather, Splashin' Safari ... has two. Yep. This water park is equipped, I tell you.] and the kid-friendly playground. 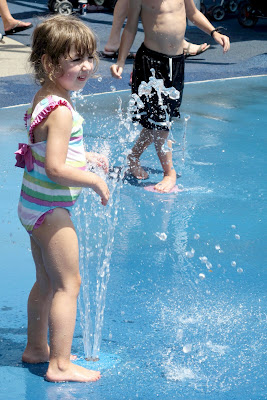 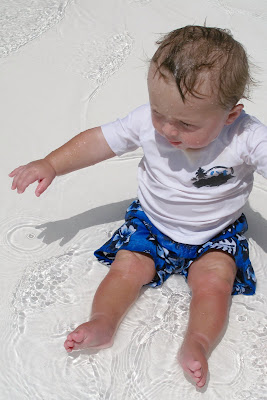 So back to Ben and I not being on the carousel, or the fairy tale land train, for that matter. The women [Note: By "women" I mean females that are old enough to be my mother who should be able to apply common sense to rules. Keep that in mind.] who were working as attendants at both these low-key, seemingly baby-friendly rides told me separately as I was getting ready to step onto the carousel/into the train that Ben couldn't ride because he wasn't wearing shoes.

No, he doesn't stand up, much less walk, on his own.

Yes, he would be sitting in my lap.

Because the rules say everyone must wear shorts/pants, shirt and shoes. Um, yeah, OK. One -- at least this momma -- would think that some common sense would do. Apparently the rules need an asterisk.

* The shoes only apply to people who can walk and whose feet will be touching the amusement ride.

Even without train or carousel rides, Ben was a trooper ... 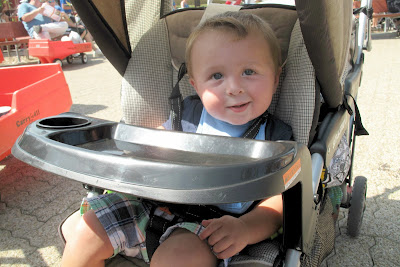